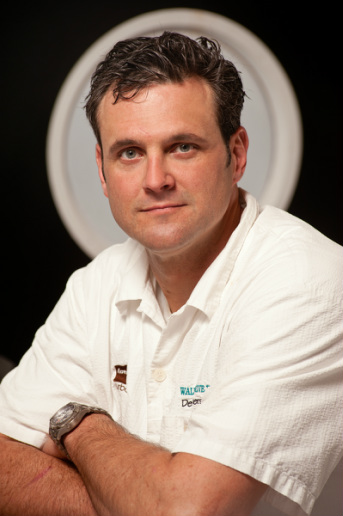 Derek Emerson is executive chef and owner of Walker’s Drive-In in Jackson, Mississippi. Derek grew up in Beverly Hills, Calif., but spent summers with his grandparents in Meridian, MS.

Fresh out of a small culinary school in Memphis, Derek worked for BRAVO! in Jackson, MS. He moved to Atlanta to hone his skills working for Nava, Buckhead Bread Company, and the Blueridge Grill. While in Atlanta, he accepted an executive sous chef position with Dick & Harry’s. During his time there, Dick & Harry’s was voted best new restaurant in the Atlanta Magazine.

After four years, Derek moved back to Mississippi to become executive chef for a new restaurant, Schimmel’s, where he met his wife and partner, Jennifer Emerson. When the opportunity arose for them to buy the nostalgic 1950’s diner in the heart of the Fondren district in Jackson, they snapped it up.

Under his keen eye, Walker’s Drive-in has become a regional favorite written up locally and in national publications such as Southern Living. Derek has also been a James Beard Award semi-finalist as Best Chef in the South. (2008, 2009, 2010)

In 2010, Derek and Jennifer opened their second restaurant, Local 463, in Madison, MS. Local 463 is a restaurant focusing on working with local suppliers and farmers to get the best possible products available.

Derek can be found most nights during the week, doing what he loves best, cooking in one of his kitchens.